The NJCDD believes that the improvement of educational results for children with developmental disabilities is an essential element to ensuring equal opportunity, full participation, independent living, and economic self-sufficiency as they move into adulthood.

To that end, the Council has created and compiled a wide variety of resources and materials for educators and parents of children with developmental disabilities, which address issues of high importance to ensuring that children with developmental disabilities are educated in settings that take their safety, well-being, and academic needs into the highest consideration

The NJCDD has compiled the “Tools for Teachers” to provide basic information and guidance in demonstrated best practice strategies for including students with disabilities in general education settings. Developed by the Council’s Subcommittee on Education, this five-part program covers such topics as:

Fifty years ago the landmark Brown vs. Topeka Board of Education court decision established that separate is not equal and that students educated in segregated settings are denied equal opportunity under the law. Since then, long-standing federal and state laws and landmark court decisions have reinforced that decision.

Ten years ago, the New Jersey Developmental Disabilities Council gathered information about segregation in New Jersey’s schools and presented the numbers and facts to interested parties. The result was a 1994 publication developed by the Council’s Education Subcommittee, entitled Separate and Unequal. The report described an entrenched pattern of segregation of students with disabilities in our State, gave data comparing New Jersey nationally, reported on research about the benefits of inclusion and made extensive short, medium, and long-term recommendations to move our state forward on this issue.

Ten years later, the now renamed New Jersey Council on Developmental Disabilities Education Task Force1 revisited the 1994 publication and prepared an update of that report. As they did in 1994, the numbers and facts in this document clearly show that the entrenched pattern of segregation remains with us today, despite the fact that the State has adopted several of the Subcommittee’s 1994 recommendations.

This guide is intended to educate families about school practices that utilize physical restraints and/or seclusion to control behavior in children with disabilities. The guide also examines the potential effects that these practices may have on students; explains that there are other strategies available; and informs on a what experts and advocates are saying and doing about the issue.

What Parents Should Know About the Use of Restraints and Seclusion

OUT OF DISTRICT PLACEMENTS: ISSUES TO CONSIDER

Out of District Placements: Issues to Consider

Determining where your child will receive special education and related services can be a daunting process. Parents find themselves considering out of district placements for a variety of reasons, e.g., school recommendation, lack of accommodations and supports by the public school district, fear of their child being ostracized by classmates, a sense of safety for their child, etc. This tool is designed to assist parents in making informed decisions. By considering the issues and tips listed below families can ensure that inclusive opportunities are maximized.

The following organizations can provide information and training about inclusion: legal requirements, developing an IEP for inclusion, and advocacy strategies to secure inclusive services for your child.  The organizations with an *asterisk beside them also have limited resources to support parents at IEP meetings regarding inclusion. On the inside is your step by step guide to getting your child services in the Least Restrictive Environment. 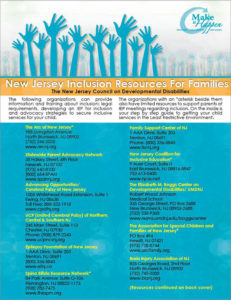 A SCHOOL DESIGNED TO SUPPORT THE EDUCATION OF STUDENTS WITH DISABILITIES

The environment impacts its inhabitants in multiple ways. The physical environment allows or bars access depending on the person-environment fit. Some school buildings allow all to enter through the front door, some welcome typical students at the front door and direct others to a back entrance and some turn most students with disabilities away. The goal of this manual is to increase the number of school buildings that enable all students to enter through the same door, attend the same classes, and navigate the side of the same hall by side. 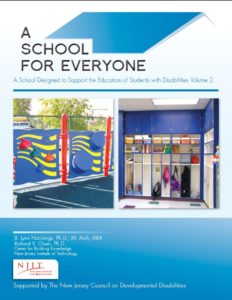