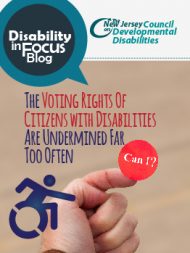 There are many ways in which it is important for people with disabilities to participate in society, and governments, and the general public have made some strides toward full inclusion. As stated in past articles, the progress made as a result of the Americans With Disabilities Act cannot be understated. However, they can and have been overstated and incomplete. Given that the ADA exists as a result of government intervention in response to relentless activism, one has to wonder why the ability of individuals with disabilities to vote is one of the most woefully unaddressed aspects of society.

The non-partisan government accountability office put together a report and found that disability access is completely absent at some polling locations, and is incomplete at others. The report reads in part,

Inaccessibility of polling locations may in fact impede the integrity of a secret ballot, as some individuals with disabilities are not able to vote on their own.
The report continues, “For example, some voting stations were not set up to accommodate people using wheelchairs, which might have required someone else to help them vote.”
If it is possible for individuals who are disabled to vote fully independently in some polling locations, which the report implies is the case, there is no reason why this should not be a paramount concern and a national effort.

The report concedes, “GAO was not able to fully examine voting stations at 41 polling places due to voting area restrictions. Most states that completed GAO’s survey reported taking actions during the 2016 general election to facilitate voting access for voters with disabilities, including having accessibility requirements, providing election worker training, and conducting oversight. For example, 44 states reported having accessibility standards for polling places, and 48 states reported conducting at least one oversight activity, such as analyzing accessibility complaints.”

It is a huge problem that the GAO was not able to examine all polling stations. Aside from the possibility that the established standards are not consistent across the country, and likely not optimum, the vast majority of polling places that were examined don’t even meet those standards. People with disabilities are some of the most vulnerable individuals in the country. Our healthcare, education, vocation, and sometimes our lives are based on the decisions that the government makes. The least the government can do is ensure we have a say in the process.

An analysis of the report, found on disabilityscoop.com, mentioned some of the ways that the government has tried to include people with disabilities in the voting process. “Under the Help America Vote Act,” the article says, “all polling stations are supposed to have at least one accessible voting system for federal elections. What’s more, the Americans with Disabilities Act mandates that public entities choose facilities for activities like voting that do not exclude people with disabilities.”

The findings of the GAO report do not at all seem to reflect the goals of the Help America Vote Act or The ADA. Inclusion is a great sentiment to get behind. It would simply be preferable if efforts were actually completed to make those goals a reality.

The GAO report continues, alleging that, The ADA and HAVA help provide a framework for ensuring access to polling places and voting methods, thereby helping ensure equal opportunity for voters with disabilities to participate in America’s democracy.”

What good is the nominal effort to ensure that people with disabilities have voting rights if a large number of polling places cannot fully verify that this is the case? Especially since the HAVA did not include any funding to make previously inaccessible locations accessible? The law mostly focused on replacing voting equipment. This is a noble goal, but nonetheless an incomplete one if citizens with disabilities are not able to vote.

So what is to be done? What are some concrete ways in which the rights of Americans with disabilities to vote can actually be ensured?

For starters, a huge help would be to ensure that all Americans have the right to vote. Contrary to conventional wisdom, the constitution only ensures that the right to vote cannot be denied to a citizen based on race or gender. It does not say anything about guaranteeing the right of every citizen to vote. So, in theory, the government can, at present, rationalize all sorts of ways to deny someone the ability to cast a ballot, so long as that denial is not explicitly rooted in a citizen’s race or gender. It is long past time the federal government amend the constitution to guarantee every adult citizen have the right to vote. This measure is endorsed by Congressmen Marc Pocan and Keith Ellison. At long last, the burden would be on the government to make sure everyone can vote, instead of on the citizens to prove the denial of the right to vote is motivated by race or gender. As a consequence, the rights of citizens with disabilities to vote could drastically improve.

More directly, with so much of everyday life dependent on the worldwide web and social media, and the importance of being in a singular physical location to conduct activities largely diminished, it seems kind of absurd that the right to vote is so often dependent on a person’s ability to go to a polling place. People shop online. People telecommute and do their jobs online. People apply to jobs online. People vote in polls for completion shows online, and while those polls may not be nearly as consequential as election to determine representatives of the government, they’re still real. They have material consequences. At the very least, the government should enact universal voter registration and have mail-in ballots as an option for everyone in the country so that they may vote at their own pace. However, given that the internet is often more accessible for people with disabilities than using a pencil, there is plenty of justification for online voting. Concerns about security are present in the current paradigm, but luckily, identity theft is already against the law, as is voter fraud. Given all the benefits, and given that the government already knows who its citizens are, there is plenty of justification for simply providing your social security number and your name, and just voting as simply as one would in any online poll. It would increase voter turnout, alleviate the annoyances of any election day, and ensure political rights of people with disabilities in unparalleled ways. Again, any of these options are the least the government can do.