The Disability Rights Movement Has Scored Some Legislative Achievements, But We’re Not Nearly Done 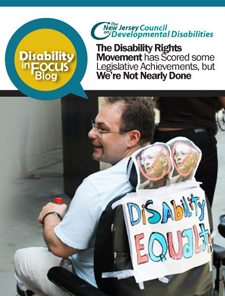 To have disabilities in a world which is naturally inclined to exclude people with disabilities is a challenge, and a constant one.  People do not always think about whether a building has a ramp at its entrance, or whether a street corner has a curb cut, or whether there is a functioning elevator for people to use inside a building. There are plenty of ways life can slow down for a person with a disability which are overlooked by the general population. Fortunately, there have been efforts made to make the lives of disabled people easier, such as the Americans with Disabilities Act (ADA), signed into law in 1990. Unfortunately, it’s 2017, and problems like the ones listed above are an everyday occurrence for people.  The ADA and laws like it are not enforced enough, and even when they are, they may fall short.

For all the good intentions that the ADA might have, the legislation only stretches so far. It is not seen as feasible to make every public and private building, every place of public accommodation, to be made accessible, no matter when it was built. Legislation only affects buildings that are built after passage of the law. It may be logistically complicated, but that’s clearly not enough, and a more widespread effort must be made to increase access. Whether it is new legislation that needs to be passed, a massive awareness campaign, or amendments to the existing legislation, there are so many ways in which the accessibility of the outside world could be improved. Presently, these conditions are simply not included.

The limitations on the ADA are not only a matter of accessibility for citizens with disabilities. Sometimes the statutes in the law are simply not enforced. It is not uncommon for someone to ask whether a venue is accessible and to be simply told no. Of all the areas of discrimination that have been exercised against someone, disability seems to be the most unnoticed. When someone is denied access to a place of public accommodation due to disability, it is not seen as an insidious act of prejudice but rather an unfortunate, but insurmountable conflict.  This line of thinking likely stems from the false belief of why a person with a disability is being discriminated against. Business owners fool themselves into thinking that they “can’t” serve someone due to their disability, not that they won’t. However, businesses clearly could accommodate everyone if they made a concerted effort to do so. They simply do not think of disabled customers as a priority. They do not see us as a class of people that have a history of being shunned; they see us as a class of people who they must break bad news to. The truth is that these kinds of acts of discrimination are much more insidious than ones fueled by feelings of hatred. For a business owner, turning away a disabled patron is not met with a scowl, but with a shrug.

There are other ways in which property or business owners may pay lip service to accessibility, but as long as shortcomings are not blatant, buildings will often remain non-compliant. A ramp may be too steep. A door may not be wide enough. An elevator might not go to all floors. A bathroom stall may not be wide enough, and even if it is, it may be a problem for some people to easily close the stall or door to give themselves privacy.

Another area of discrimination that does not get noticed is discrimination in the workplace. A company may see it as a gesture of good will and inclusivity for them to hire someone with disabilities. They may, however, also see it as tedious and unnecessary to accommodate someone they are not prepared to accommodate. There are plenty of entry level jobs that someone with a physical disability might fit the description for, apart from a seemingly random requirement that a “candidate must be able to lift up to 25 pounds.” Granted, it could be a very auxiliary part of a job that may in fact come up, but if the principle purpose of a job does not involve physical labor, there is no reason why incidental moments of physical labor in a predominantly non-physical job could not be adjusted or done by someone else. However, a company may simply not want to “deal” with an employee’s disability.  They may not know what adjustments to make, or which accommodations to offer. They may well be afraid of a lawsuit. In this realm, a tactic that a company might use to “weed out” candidates that they find difficult to accommodate is to add a physical requirement that may or may not be performed on the job. As soon as a prospective disabled applicant sees this, the position is no longer an option. For people with intellectual and developmental disabilities, they may be able to perform a job function perfectly fine, but unable to prove it because of poor interview skills. Requirements of what it might take to receive a job offer may be separate from being able to actually do the job.

In short, there are plenty of ways in which people with disabilities have been accommodated. There are plenty of ways in which we have been thought of as a marginalized identity in need of equality we do not currently have. In spite of all the progress that’s been made, however, there is more work to be done. There are more paths to pave, more curbs to cut, more people to employ. The able-bodied population may have conceded a lot to us, but it is not up to the able-bodied population to decide when accommodations are “good enough.” That judgment falls on us.