Nothing About Us Without Us: Disability, Technology and Social Infrastructure 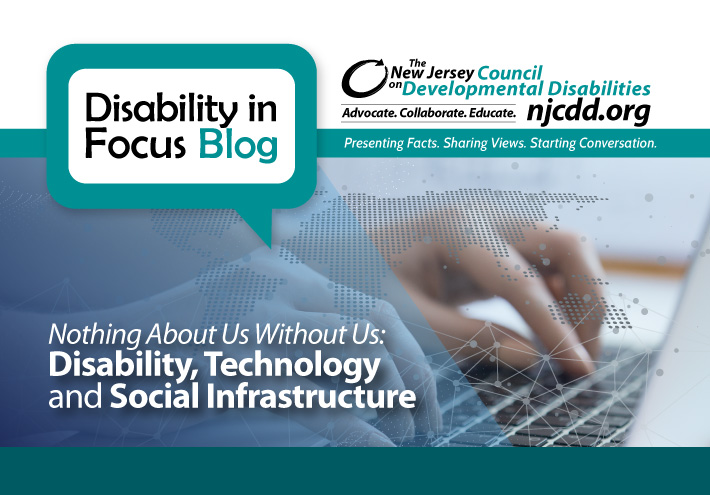 Technology has improved many lives over the course of history, and the lives of people with disabilities may be especially improved. It may also backfire.

People with disabilities are among the lowest percentage of employed people. We are often not consulted about our individual needs, let alone given the opportunity to construct solutions to our problems.

We are often not consulted because we are not trusted to determine our own needs Even when technology does work for us, we’re not considered a marketable demographic to pitch to. For this reason, many “As seen on TV” products, for example, are actually well suited to serve the needs of people with disabilities, despite not being marketed as such. These products often fuel mockery from the general public, as if to collectively ask, “Who would ever need this?” An article in Vox from September 2018 highlights this issue, saying the following:

“A variety of impairments can make these tasks challenging, including hand tremors or weakness, paralysis or paresis, limited range of motion, arthritis and other joint conditions, chronic pain, neurological disabilities or stroke, developmental disabilities, and amputations. These issues may be congenital or acquired or even temporary. Some people, for example, just need support while they recover from surgery or injuries.”

Avoiding explicitly marketing to people with disabilities for products that are, in many ways, designed for us is an issue. The general public views “As seen on TV products” as gimmicks and not as useful tools anyone might need. This is a public relations issue for “handy” products, but it also continues to marginalize people with disabilities for whom a sock aid, an egg scrambler, or a one-handed vegetable cutter may be optimal. These admittedly low-tech solutions to everyday issues which impact the ability to perform activities of daily living may be a boon for people with disabilities, but such a boon has minimal impact if people are discouraged from using them out of shame. The largely ableist general public marks anyone who uses such gadgets with a perpetual stigma of having low intelligence and deems them not worthy of respect. We need to push back against this narrative and both of those assumptions.

For higher tech, it should be said that large companies are making commendable efforts. However, there is another angle to the issue of technological access. For some, marketing exclusively to people with disabilities may marginalize them just as much as the general public who pretend they do not exist and do not need support. The middle ground is a concept called universal design, which Eve Andersson, the leader of accessibility for Google, seems to promote.

“We shouldn’t need to know they have a disability,” Andersson says. “It should just work for them.”

As another Vox article highlighted in April of 2019, wheelchair users don’t need wheelchairs that climb stairs. First and foremost, we need more ramps. In general, people with disabilities don’t need “workarounds.” They need environments in which they can exist without stigma or judgment.

We can only continue to advocate for the day that someone’s wheelchair, cane, walker, or augmentative communication device becomes as commonplace and socially accepted as eyeglasses, contacts, digital reminders and (increasingly) putting on closed captioning when watching TV. Everyone just needs to respect us enough to listen.