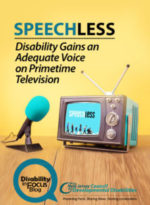 In a media landscape that so rarely includes characters with disabilities in a vast array of narratives, it’s certainly refreshing to see a television show featuring a character with cerebral palsy. It’s even more refreshing to see the character portrayed by someone who actually has it. On this issue alone, ABC’s comedy Speechless, currently in the middle of its first season, is already breaking ground.

Speechless follows the DiMeo family, who have recently moved to a new neighborhood in order to accommodate their eldest child, J.J., who uses a wheelchair. J.J., played by Barnegat, New Jersey native Micah Folwer, is nonverbal but uses a laser pointer and a letter board to communicate. What is striking about Fowler’s portrayal is the honest effort of normalization of his ability to communicate and socialize with his family as well as his classmates. Unlike many portrayals of disability in the media, Speechless offers a well-rounded, personable and unique individual in J.J that is not dominated by the sometimes burdensome reality of disabilities. In this sense, Speechless avoids the tired vibe of the “after school special.”

Vlogger Zac Anner, who also has cerebral palsy, describes Speechless as “Malcolm In The Middle, if Malcolm was in a wheelchair,” because the show focuses on the family dynamic as it relates to J.J., including his siblings, rather than J.J. individually. Minnie Driver plays the mother of the family, Maya, who is a passionate advocate against the barriers which impede J.J.’s ability to live a “normal” life. As commendable as Maya’s efforts are, they come across as slightly one dimensional and can only be construed by how she perceives J.J’s struggles. There have been multiple points in the series in which Maya has spoken on behalf of what she believes is best for her son, ironically neglecting the very aspect of his humanity that the series struggles at times to provide: the ability to self-advocate. This, also coupled with Driver’s uses of the word “stupid” and “idiot” to describe her frustrations, as well as describing J.J. as “all there upstairs,” captures a superiority complex at the expense of those with emotional and intellectual disabilities. This may stem from avoidance on their part to acknowledge the connection between J.J.’s bodily impairments and the fact that cerebral palsy stems from differences in one’s brain. This is true regardless of whether those differences include emotional or intellectual impairments.

As J.J has grown up, he has been socialized in a culture that demonizes neurological diversity. Faced with constant reinforcement of the notion that neurological differences are necessarily inferior to “normal” conduct, J.J. and his mother make an effort to hold J.J. to the social standards of his able-bodied peers. This is understandable, but nonetheless problematic. At times, J.J’s goal is not as much trying to forge an identity, but to construct a presence that will be seen as palatable to the rest of society. As difficult as this is to accept, it would be beneficial to realize that neurotypical norms can be toxic and impossible to live up to. Despite Maya’s effort to offer J.J. the most “normal” life he can have, she comes across as coddling and overprotective and makes it harder for what she actually hopes for to come to fruition. It is possible that these standards that Maya holds on J.J., and that J.J. holds on himself are impeding his chances for a fulfilling and independent life.

On the other hand, Driver’s portrayal is a faithful depiction of a persistent mother having to deal with the constant reality that life is not, and never has been “fair” for one of her children. In turn, for her other son, Ray, and her daughter, Dylan, life has quite literally revolved around J.J’s needs. Ray sums up this sentiment in the pilot episode when, initially, J.J’s transition to a “mainstream” school is not working out. Ray wants to remain at the current school because he is trying to get close to a girl he met: “Right, it’s something I want, so who cares?” Dylan on the other hand, has developed a strong exterior and self-sufficiency. This is likely a byproduct of necessarily receiving less attention from her parents, coupled with, like anyone, the stress of adolescence. With J.J. the catalyst of major family decisions for both Ray’s and Dylan’s entire childhood, it is naturally difficult for able bodied siblings in a family with a disabled child to forge their own identity and the show does a good job highlighting that.

Some of the more telling moments in the series so far include the family’s father, Jimmy, talking to Ray about how he remains so optimistic despite not being seen as a good neighbor by anyone in the various communities in which the DiMeos have lived. Ultimately, his optimism came from the belief that a struggle as big as having to raise J.J. yet still remain stable as a family renders them “bulletproof.” This is a very powerful message, and one which encourages people with disabilities and their families to deal with reality as it comes, but never to ignore the positives that come from a life subject to possible marginalization. This sets up a poignant contrast in the personalities of Jimmy and Maya, who, when examined, simply have different approaches to achieve stability for the family.

This stability is emphasized in an unconventional way with the addition of J.J’s full time caretaker, Kenneth, who bonds with J.J. such that there are times he can act simultaneously as an authority and a friend, without an overbearing attachment that Maya acquired from years of being a mother to J.J. Kenneth won Maya over when she realized how competently he handled J.J’s bathroom needs. In addition, he’s able to smoothly integrate as a sort of family member who can amplify the voice and help foster the identity of someone for whom it is sorely needed. Navigating through a world in which ableism is alive and well can build character, and sometimes the marginalization of such an identity is so pervasive that even the family can’t escape it. The challenges of the family are always present, but, despite the title, J.J. is no longer rendered speechless. In more ways than one, this show is a work in progress.