Barriers to the Workforce Especially Apparent For Applicants with Disabilities 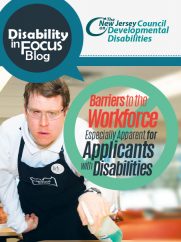 Individuals with disabilities are known to have difficulties finding employment at a higher rate than their non-disabled counterparts, and despite visible efforts to get a class of people who urgently need work to be employed, it’s harder than it might seem.

A human-interest piece by The Washington Post explores one of the options: vocational rehabilitation programs. The article details some of the pitfalls that clients might come across when participating in those types of arrangements. Delving into the complications, the piece argues that, “There are questions that have become increasingly urgent in a country that is hardening its stance toward recipients of government benefits.” In other words, it is becoming increasingly more difficult for people to receive aide while unemployed, which, in turn, makes getting a job a challenge.

The article then delves into the ways that certain states seek to make it harder on citizens in need to receive benefits while out of work.

Wisconsin wants to be the first state to require childless Medicaid applicants to undergo drug testing. Georgia has reduced the number of food stamp enrollees dramatically after introducing work requirements. All the while, the federal government seeks to make its social safety net more meager than it already is. Over the next decade, Medicaid, food stamps, children’s health insurance, and programs that serve people with disabilities are targets for dramatic cuts. The article arrives at a cross roads in its analysis of those facts, saying,

“Taken together, the policies either amount to an assault on the vulnerable, according to Democrats, or, according to Republicans, a promotion of the most American of values: the dignity of work.”

The piece tells the story of Teresa Boullemet, a job coach tasked with getting a client past her probationary period at Walmart.  Lisa Daunhauer had been using the Social Security Disability Insurance program since 2011.  The article portrays Daunhauner as a woman who is exceptionally desperate, terming her beginning stage as a cashier at Walmart as “the bottom of the American economy.

Boullemet said she tried not to dwell on the realities of the task ahead, that only about 10 percent of her clients get off disability. Nationally, the number is even lower — 3.7 percent of workers with disabilities do so within 10 years of the first payment. In general, unemployment for people with disabilities is a bleak prospect. According to the Bureau of Labor Statistics, the rate of people with a disability who are out of work and looking for a job was 10.5 percent in 2016, more than double that of people without a disability (4.6 percent).

This does not refer to the total percentage of the people who are without employment. This refers only to the people who are actively looking for work. What this means is, the search for employment has sometimes become so exhausting and taxing for some people, that they give up their job search altogether and thus are not even considered to be “unemployed” after a while.  The numbers of the official “unemployment rate” are such that the types of people who are at any point too discouraged to maintain an active search are excluded from that percentage.  An “official” unemployment rate for people with disabilities of more than double the rate of the general population is not the least bit promising, and Boullemet knows how hard it can be to do right by her clients in the long term.

She takes it day by day, remembering what she needs to do to connect with her clients: “Always smile. Always look them in the eye. Give homework that makes them vested in their rehabilitation. Never get fewer than three phone numbers.” She said she knows how difficult it is for people to remain motivated in tough times.

The piece describes Lisa Daunhauer expanding on why she can be good for Walmart: “I have 16 years of experience in a medical office setting. I am a hard worker, dedicated, and dependable,” she wrote in her cover letter. “I am currently unemployed, but . . . I could be an asset to your organization.”

Despite her experience, she still has been living on disability for several years and is not guaranteed security and financial stability as she struggles to find work. Once she does, she will still be, as the piece said, “at the bottom of the American economy.”

The sentiment that Americans with disabilities are less of an asset to the economy than their non-disabled counterparts is not just in our imagination. The federal government (and so-called “conventional wisdom”) reinforces this constantly.

“If you’re not truly disabled,” Mick Mulvaney, director of the Office of Management and Budget, has said, “we need you to go back to work.”

Is Mulvaney the ultimate arbiter of who is and is not “truly disabled”?

What about the strength of Americans who are not “able-bodied”? Why specify non-disabled Americans?

“If they can get back to work, then by all means, we should help them,” Sen. Tom Cotton (R-Ark.) has said.

It seems like, given the government’s advocacy of cutting benefits which help Americans with disabilities, it would be reasonable to be skeptical of Cotton’s assessment of who “can get back to work,” and who supposedly can’t.

The fact remains that even with the nominal presence of assistance for Americans with disabilities, entering the workforce is harder than it seems.