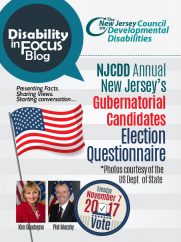 On Tuesday, November 07, New Jersey voter will choose our next governor.  Whomever voters choose to lead our state government over the next four years, it is important for residents with disabilities and those who know and love them to have a clear understanding on where our candidates for governor stand on issues most important to our developmental disabilities community.

Over the past several months, the NJCDD repeatedly reached out to the campaign offices of New Jersey’s Republican and Democratic candidates for Governor, Kim Guadagno and Phil Murphy, and presented each of them with a list of four questions that address major issues of importance for New Jersey residents with developmental disabilities and their family members.  For this year’s questionnaire, we worked alongside advocates in disability housing, DSP living wages, and special education to craft the questions we posed to each of the candidates

As of now, only Democratic candidate, Phil Murphy, has submitted a response to the questionnaire.  His responses are shown below, and will also appear in the Fall 2017 issue of our People and Families Magazine.  Any response received from Kim Guadagno’s campaign will also be published on the blog.

Below is a complete list of the questions asked along with the full and unedited responses submitted by Phil Murphy.

Prior to 2008, special education students in New Jersey were funded based on their level of need. Each student was placed into one of four need tiers, with higher per-pupil state funding associated with the higher need tiers. As part of the School Funding Reform Act of 2008, New Jersey adopted a census-based model. Each district’s resident student population is multiplied by the statewide average rate of special education classification (roughly 14.7%) to determine the number of special education students. This funded count is then multiplied by the special education per-pupil funding amount in order to calculate the total special education funding allotted to the district. SFRA also wealth equalized two thirds of this amount, splitting it up into a state and local share, and then funds the remaining third entirely from the state. The formula has not been fully funded.

Numerous studies, work groups, and education organizations have called for a return to the “head count” “tiered” funding based on intensity of need. Advocates call for a special education funding mechanism that is adequate, efficient, equitable, predictable, flexible, transparent, fully placement-neutral, and is accountable for both spending and student outcomes.

What are your plans to address this issue?

I have consistently supported the school funding formula – the only formula that has been blessed by the Supreme Court. Over the past 8 years, Governor Christie has underfunded the school funding formula by over $9 billion, never allowing it to work. However, the formula is not without flaws and we must ensure special education funding is provided adequately and fairly. Funding our schools and special education services is not just fair to kids, it’s fair to all New Jersey residents. It will relieve the pressure that has been placed on schools to cut costs by cutting corners. As governor, I will work to ensure we get back to standing for the right things in our state – starting with fairly and sufficiently funding our schools and special education programs

Submitted by the New Jersey Supportive Housing Association
The ability of people to find a home that is affordable, accessible, and safe is an increasingly impossible dream for 30% of New Jerseyans.  This number rises dramatically for people living with disabilities.   At the same time, people living with special needs whose options were extremely limited only a decade ago, are ready to move into communities with increased independence given the right supports.  But far too many are living with aging parents, and time is running out. The affordable housing crisis is real and more acute than ever.

What priority would you give to making more affordable options available to those living on limited incomes?  What strategies would you employ to address the lack of affordable housing in the state?

As governor, I’m determined to make New Jersey the most inclusive and most accessible place to live, work, and raise a family for people with disabilities. That goal begins with our state government and includes affordable access to housing. The shortage of affordable housing is a crisis. We can start by stopping the diversion of money away from affordable housing funds for other needs – a practice that Governor Christie and Lieutenant Governor Guadagno have mastered. I will also tackle the problem of

foreclosures head on. We have to make it easier for people to stay in their homes, and I have proposed that we use Wall Street mortgage settlement money to purchase vacant foreclosed properties and repurpose them as affordable housing. And I support the expansion of successful programs like the Neighborhood Revitalization Tax Credit, where every public dollar invested has returned many times that in private dollars.

Submitted by the New Jersey Coalition for a DSP Living Wage
Around the country and here in NJ, there is a massive shortage of Direct Support Professions (DSPs) who support people with intellectual and developmental disabilities to live in the community and achieve meaningful, productive lives to the best of their abilities. NJ families and providers are having great difficulty recruiting, hiring, and retaining individuals to fill DSP positions.  Turnover rates are high (44%); vacancy rates are high (28%); and, overtime is out of control. One significant factor is the pay rate. The average hourly rate for a DSP is $10 per hour ($20,800 a year).  By contrast, those who perform similar work in state-run Developmental Centers are paid an average of $45,000 a year, have pensions, salary increases, and other benefits.

Given that the NJ Division of Developmental Disabilities (DDD) intends to remove every person with developmental disabilities from the State’s Waiting List by having their needs and supports met in the community, what solutions might you suggest for addressing the scarcity of DSPs?

I understand that Direct Support Professionals provide invaluable services and critical one-on-one care to help individuals with intellectual and developmental disabilities integrate into their communities and achieve greater independence. And I fully recognize the need to increase their wages and that reimbursement rates for institutions that pay these wages need to go up as well.

Submitted by the members of the New Jersey Council on Developmental Disabilities
Over the past several months, disability advocates in New Jersey and across the country have been deeply troubled by proposed federal cuts to Medicaid.  In Congress, bills in the House of Representatives and the Senate called for deep cuts of as much as $880 billion over a ten-year period.  In addition, the President’s budget proposal calls for added cuts of over $600 billion.  While even small cuts or caps to the program would cause harm to the over 900,000 New Jersey residents with disabilities who rely on Medicaid, the deep cuts proposed by Washington would be catastrophic.

What steps would you take to protect Medicaid for New Jersey residents with disabilities?  If cuts to the program become a reality, how would you propose New Jersey respond to the loss of funding?

As I’ve repeatedly said and have stated clearly on my website, improving the lives of people with disabilities is a top priority. As such, I will fight to protect Medicaid coverage for them as well as all of the 1.8 million New Jerseyans who now depend on Medicaid/CHIP. I will work with our federal delegation to fight any Republican plan to convert Medicaid into a state block grant program, which would slash billions in federal funding to New Jersey and hurt our state’s most vulnerable families. As governor, I will also explore all ways to make Medicaid more efficient, including making better use of technology and pursuing waivers that will allow Medicaid to be administered in a way best suited to the needs of our state.