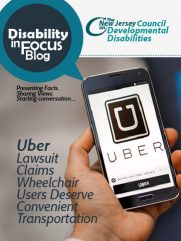 In what could be a big win for the disability rights movement, a non-profit activist group filed a class action lawsuit in July alleging that the popular ride-sharing app, Uber, discriminates against wheelchair users.

“Having grown rapidly since it began operating in New York in 2011, Uber provides hundreds of thousands of rides a day in New York City, but for riders who need wheelchair-accessible vehicles, it provides vastly inferior service, or in many cases, no service at all,” the lawsuit read.

Uber, lacking universal access for people with disabilities, leaves people unable to use their service at both a physical and social disadvantage. With the Internet age came the “sharing economy,” which has removed so many social barriers for most people in young adulthood. Mobile applications like Uber and Lyft are economically sound options for people who cannot or choose not to buy a car. Ride sharing is also a tremendous tool for the spontaneity of people’s social lives. That, more than anything else, is what many wheelchair users lack. Ride sharing allows a driver to pick you up minutes after you ask. One of the problems with these services (particularly for people with disabilities) is that the drivers simply use their own car. One of the obvious challenges with people using their own car is that the service is not going to be accessible to all passengers.

It is time for wheelchair users to experience the same level of social spontaneity as their non-disabled peers, whether they’re able to drive or not. One ultimate goal of many people with disabilities is to be as independent as possible.  It isn’t sufficient or even correct to say that people with disabilities need to be treated “like everyone else,” because we don’t. To be treated “like everyone else” would mean no disabled parking spaces, no curb cuts, no larger bathroom stalls, and no accommodations in general that make it possible for people with disabilities to navigate society.  Socialization should not be an arduous process. Just as strides have been made in physical access of public spaces, strides have to be made in the social realm too. A ride sharing application specifically for wheelchair-using passengers is a step in the right direction.

People with disabilities need to be noticed in such a way that our specific needs are considered.  Uber, whether they want to admit it or not, is a service of public accommodation.  And with that comes responsibility to meet the needs of all passengers, whether or not they have adaptive mobility equipment. One would think that Uber would take advantage of the relatively large potential clientele who cannot drive much more effectively than they currently are. Considering the lack of wheelchair access, Uber is essentially blocking out a demographic that, while small, could theoretically be some of their heaviest users. The population with disabilities is more often not able to drive when compared to the rest of the population. As such, they may use Uber for routine transportation on a regular basis instead of occasionally.

The lack of wheelchair access has been an issue for Uber in the past, and in response, Uber tends to shrug it off, stressing that they are a technology company and not a transportation service. According to a report from The Verge, this issue goes back to at least last year. Transportation policy expert Bruce Schaller weighed in, the initial report reading in part:

“Uber and Lyft have pushed back against requirements that a certain percentage of its fleet be accessible to riders in wheelchairs, arguing that majority of their drivers are using their personal cars.”  Schaller says Uber’s reaction is to simply declare, “We don’t have a fleet.”

The report continued stating that “Accessibility advocates have proven to be ride-hailing apps’ loudest critics,” later helping to block a bill in New York that would have allowed ride hailing upstate and in Long Island. A telling part of the initial report comes to the conclusion that these ridesharing companies simply don’t seem to really care about listening to the concerns of a potentially huge costumer base. “Uber and Lyft continue to resist their efforts, apparently not seeing any downside to appearing unsympathetic to wheelchair advocates,” the report stated.

The lawsuit seems essentially to be a standoff between a stubborn and powerful transportation company that has done a lot to make life easier for the population, in theory, but in practice, has largely ignored labor standards on the grounds that its drivers are self-employed and have every right to use their personal cars. As it happens, most people do not have a personal car ready to accommodate a person who uses a wheelchair. However, the “sharing economy” in general is one that is meant to serve the public. An app meant to provide transportation that excludes people who can rarely, or ever, personally use their own car, is not doing that if they don’t provide for a population that would definitely make use of it.

The initial AP report of the lawsuit summarized in its subheading that the plaintiffs claim that although Uber offers wheelchair-accessible vehicles, they account for fewer than 100 of the 58,000 Uber vehicles dispatched in NYC.  The plaintiffs say, “special vehicles can be used by other riders and may be unavailable for use by disabled riders,” These rides can “face extended wait times, or are still denied access to the service altogether.” So the conclusion is that, even with the very few vehicles Uber uses for rides with disabilities, Uber still cannot promise adequate access for riders with disabilities. The dodging of the issue is understandable, but still not justified. There’s a reason that disabled parking spots are reserved exclusively for people who need them, and not just open for any driver to use. If Uber cannot guarantee timely and reliable access to their transportation, wheelchair users deserve an application that places them, as clientele, the first priority.\

Addendum – 10.10.2017
Recently, in a possible response to the lawsuit, the business magazine, Crain’s reported on the forming of a coalition in New York City to develop a citywide system that includes Uber and the members of the Taxi and Limousine Commission. The system would dispatch wheelchair accessible vehicles. The system would dispatch these vehicles for 10% of their rides initially, and up to 25% by 2021.  Troublingly, the system does not seem to require accessible vehicles be reserved exclusively for riders with disabilities. Notwithstanding that this system would be extremely geographically limited, data from advocacy groups suggests that 90% of wheelchair users in New York City live in boroughs where these companies are less likely to dispatch cars or cabs. This citywide system could serve as a marginal improvement, but, as this article demonstrates, much more must be done.