There Are No Fully Accessible Living Environments. What Can Be Done? 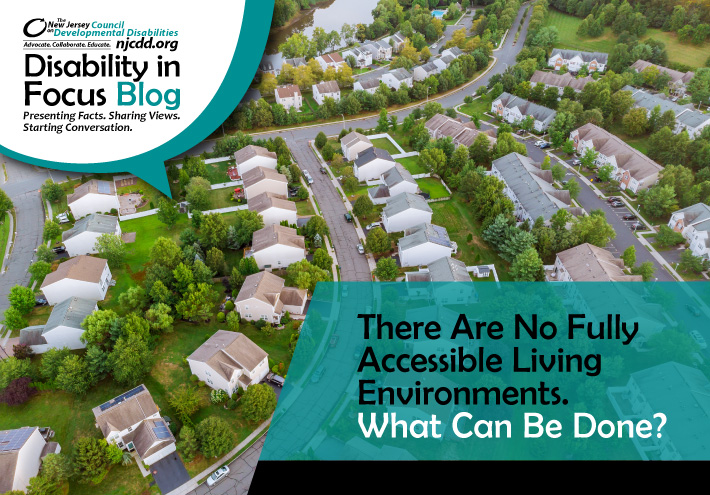 And often times, they do not get the accommodations they need because the social infrastructure as well as the literal physical infrastructure around them is ill equipped to support them. There are advantages and drawbacks to every living environment for disabled people, each with their own glaring flaws, and none of them even close to the ideal environment for people with varying levels of impairment in comparison to the general population.

Austin Epstein has lived a long life in less-than-optimal environments, specifically when it came to his education.

“I grew up in an era before mainstreaming. Bergen County had no Special Services at that time. Back in the late 1950’s early 1960’s there was not much choice or opportunity to select a program that would be beneficial back then.” Epstein said. Mainstreaming is one of the most important aspects of inclusion for many folks with disabilities because it necessitates inclusion into the wider world. If that world were built for disabled individuals, mainstreaming in aspects of life other than education would be an obvious goal. Epstein continues,

“My educational needs, unfortunately, took a back seat to my physical needs. The thinking was that if I kept having therapy, I could walk independently; unfortunately, it was not the case.  I missed more academic work than I should have. There was no note home to my parents Austin missed basic math; please go over this. At eighteen years of age, I had to go back to kindergarten level to learn basic skills. I lacked the fundamentals because no one was paying attention to my needs.” In the decades following his education, Epstein has been heavily involved in disability advocacy campaigns.

For generations, especially after the creation of the New Deal and subsequently the creation of the interstate highway system, society has placed an image in the head of the average young adult to “settle down” in the suburbs and “start a family,” two activities which require considerable wealth that disabled people are less likely to have. This is not to say that people in these adverse circumstances do not or should not live the lives they desire to live, but with living environments as they are, people are not thriving as they should.

Both suburban and rural areas are some of the most socially isolating environments in which a person can live.  The opposite problem, of course, is that cities are often too concentrated, too congested, and often just not accessible. It is objectively a good thing to have neighborhoods which are not car dependent, but that also needs to be coupled with the needs of people with mobility issues in mind. It is most ironic that a person in a wheelchair may find themselves in desperate need of a “walkable neighborhood.”

Scott Cohen, a teacher, and father to his disabled daughter, Erica, has described certain aspects of what an ideal downtown could look like. In Flemington, where the family lives, there exists what are called outlets, which are essentially shopping centers. Perhaps, Scott elaborates, communities could be built around them, including accessible housing. Scott seems to believe that a fully immersive community is one where the commercial and residential centers are integrated into a combined communal space. He says that the outlets, as of now, aren’t doing great, but he is hopeful about what a more accessible town could look like, “There would be like this little commune of homes…. and you could have little shops, [since] there’s already [surrounding] restaurants, and it’s just like, it’s not even like a downtown; it’s just more like a little sub community.” It’s clear that housing needs to be close together. Erica agreed that being able to walk around without a car would be a distinct advantage once she begins college. With many disabled people unable to drive, the most universally accessible environment is a pedestrian-friendly one with robust public transportation.

Ryan Roy, who is in his 30s with Pervasive Developmental Disorder (Not Otherwise Specified) has said that education as he experienced it had a profound impact on his life going forward “It’s been years, I’ve been so isolated, especially going to special ed, you know, go into schools that are being labeled, I was being labeled as special ed. Nobody does seem to care nor understand that I have a mild development disability or give me a complete amount of acceptance over there.”

Jessi Parker’s son, Craig has been living on his own since 1999 and one of the reasons that Jessi thought that Craig needed a different environment was that he needed a better way to meet people.

“After he graduated from high school, just like everyone else he wanted a social life. And so, he tended to hang around with people that were in the neighborhood that were a lot younger than what he was. So, because he just wanted to socialize with people, and I mean I saw that right away I actually graduated, you know from high school, and he lost that high school connection, right. So, he was looking for people to socialize with.”

Kathy Moore, a paraplegic as a result of injury, shared valuable perspective on what living in an accessible community means to her. After succumbing to her injuries as a result of domestic violence, she was able to escape and secure housing for herself. Thankfully, her housing is accessible and suits her needs.  She acknowledged there were drawbacks and advantages to living in any environment. Growing up in some violent areas in New York City, her father emphasized the importance of safety and she wanted to get out. In this sense, for the safety, she said, “I’ll be honest with you, I love living in the suburbs.” It is very telling, however, that the “safest” neighborhoods, especially in an economically stratified world are generally considered to be the one that are the most isolating. As a result of a recent injury to her tibia, Moore acknowledged that she is not sure when or if she would be able to drive again. On the bussing service for disabled individuals, Access Link, she said, “They have a long ways to go. I’m very sorry to say they do not have the coordination together about the pickup time, the drop off time, even though they notify you and they say that they’re on their way. I was looking at the GPS following where the driver was and then all of a sudden it disappeared on me.” She later said, “If I had to choose between a suburb where I couldn’t get around, and an urban environment which I could, I would have to go with the urban environment.”  The solution, easier said than done, for Moore and those like her, would be to ensure safety in urban neighborhoods, the violence of which is influenced in some part, by economic stratification.

Unfortunately, two of the more optimum intentionally designed communities that seem ideal for disabled individuals- “senior living centers” and college campuses, are class privileges that one only seems to be able to enjoy if they or their family have the money to provide such an experience. This, in turn, creates both class division, which is inherently alienating, and age homogeneity, which is another form of, albeit less pervasive, social isolation.

We need to universalize and make fully accessible these pedestrian-friendly, close-knit environments, using the principle of universal design.  As of yet, there unfortunately are no ideal environments for disabled people, because we live in a world made for abled people. However, all of these voices are extremely valuable, and it is important that we come together to advocate for the best living conditions possible. That starts with viable neighborhoods. That starts with robust public transportation. Ultimately, that starts with dignity.