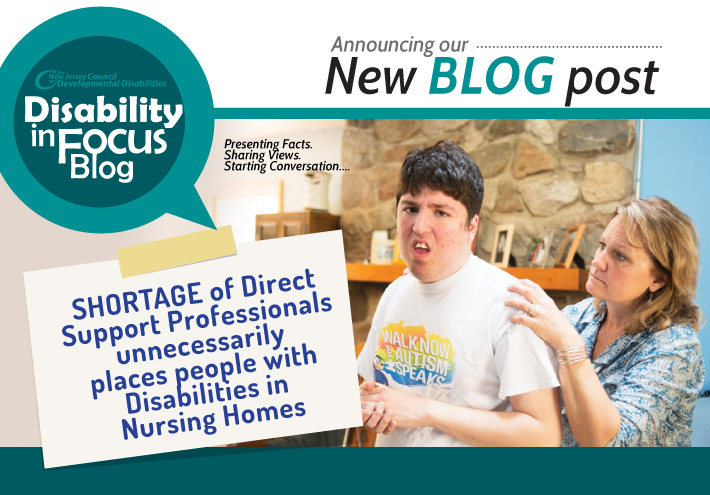 Here at the council, we try to instill a sense of independence and inclusion in society for the disability community. Unfortunately, one of the ways in which that is undermined is the occurrence of young people with disabilities living inside nursing homes. This is often due to a shortage of community-based Direct Support Professionals, and it can’t be understated how important they are to keeping some people from being institutionalized and giving them independence.

An article from The Star Tribune gives a voice to a 25-year-old woman named Korrie Johnson, who says that living in a nursing home limits her freedom. The article states,

“Johnson dreams of living in an apartment of her own, but the bright and outgoing young woman has been forced to put her dreams on hold because she can’t find enough home health workers to care for her at home.”

The Star Tribune explains that across Minnesota (*), there is “a chronic and deepening shortage of home-care workers” which forces people with disabilities to move into restrictive environments such as nursing homes and assisted living facilities. These are institutions which most people would probably choose not to live if they were given adequate support in housing of their own. The article continues, saying that “Pleasures that young Americans take for granted — visiting friends or even stepping outside without permission — are beyond their grasp.” (*)While this story comes to us from Minnesota, the community-based Direct Support staffing shortage is a crisis that has occurred across the U.S., including here in New Jersey

Lauren Thompson, a 29-year-old woman with cerebral palsy, feels stuck in the same way that Johnson does. Unable to secure round-the-clock care, Thompson moved to an assisted living facility. There she is isolated from her friends and family, as well as political advocacy work that she had hoped to be doing. Her schedule depends on the availability of the staff, who come and go on their terms. This essentially means that Thompson has no way to be independent, no way to live her life as she sees fit, and no way to really experience the fulfillment in life that everyone at least deserves to attempt. But people with disabilities who live in nursing homes and assisted living facilities sometimes do little more than merely exist.

“I survive here,” Thompson said, “but I want to do more with my life than just survive.”

People with disabilities are placed in these environments through no fault of their own. There are some people who are lucky enough to be in a geographical location which provides the direct support that they need, but also realize that if they were to move, they would not have those same benefits.

Jason DaSilva is a documentary filmmaker and disability activist with Multiple Sclerosis who is lucky enough to have the services he needs in his home state of New York. However, when DaSilva and his wife separated, the inequity of resources for the disability community across the country became more apparent to him. As it stands, DaSilva’s son and his ex-partner are in Texas. Because Texas does not have the resources that New York has when it comes to direct support professionals, DaSilva doesn’t have the opportunity to both be near his kid and retain his independence.

“The disparity amounts to institutionalized discrimination against aging and disabled people, and it prevents me from truly having a choice about where I can live,” he said in a New York Times Op-Ed.
In what DaSilva calls “the disability trap,” he further illustrates why the inequity of resources for the disability community severely restricts freedom of movement.

“If I were to move to a nursing home, where the best level of 24-hour care in Texas is available, I would have to give up my personal aide; aides in nursing homes are expected to help multiple people simultaneously.” It seems clear that in a nursing home setting, DaSilva’s assistance would start to feel impersonal and invasive, and moreover, just wouldn’t feel right. He is comfortable with a personal aide, but he could not have one if he moved to Texas. He continues, “The most basic tasks of life — showering, shaving, food preparation, eating, going to the bathroom, checking emails, answering phone calls — would be significantly more difficult, diminishing my independence as a father, my personal well-being, my health, and even my life expectancy.” Though intended as a reasonable housing and support option for people with disabilities, nursing homes for people like Jason DaSilva seem like they would lessen his ability to function as an independent person, not increase it. He says that he is only able to be an activist and filmmaker because of the one-on-one care he receives, which would not be available in Texas.

“Life has presented me with these challenges because I’m strong enough to endure them, grow from them, and help others dealing with them, too,” he said.

DaSilva makes it clear that, regardless of his challenges, he strives “to spread awareness of the damaging discrimination against the disabled population of the United States.”

He reminds himself that his son is most important, and so he continues to fight for his independence. Nonetheless, he fears that having a physical disability has infringed on his right to be a parent to his child, and subsequently wonders how many other people are kept from their families because of this issue.

Freedom of movement is a fundamental human right that people with disabilities are denied every day. The fact of the matter is that people seem to be faced with the reality of having to live in a nursing home when it is absolutely not necessary for their care. Humans are social animals and this applies just as much to people with disabilities, who remain isolated if they receive care in a restrictive environment that they do not need. The most important thing that governments across the country can do is listen to people with disabilities about their needs. If what they need is a personal aide, they should be entitled to that. If what they need is the independence and socialization that a personal aide allows, give them what they need.