Proposed ADA “Reform” Would Go In The Wrong Direction 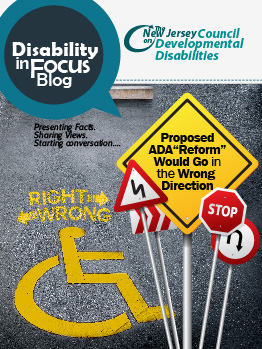 As this blog has previously explored, the disability rights movement has seen both victories and setbacks. Progress has undoubtedly been made.  There’s no question that the Americans With Disabilities Act, in effect since 1990, has made strides for people with disabilities in terms of inclusion in the public sphere. Places of public accommodation built after the legislation came into effect must be made accessible to all. In addition, reasonable accommodations must be made for workers with disabilities at places of employment.  Unfortunately, the state of affairs when it pertains to justice for people with disabilities is at risk of hitting a major roadblock.

House Resolution 620, which currently has 18 cosponsors in the United States House of Representatives, is billed as the ADA Reform and Education Act Of 2017.  Do a little research and the name will quickly prove to be woefully misleading.

In an attempt to curb what are colloquially known as “drive by lawsuits”, HR 620 would allow public businesses a longer grace period for which to correct ADA violations. The purpose of this would be to prevent lawyers from extorting business owners into settlements or cost them an undue burden in paying monetary damages for anything that is not compliant with the Americans With Disabilities Act.

This is a reasonable problem to address if it is shown that the whole purpose of a  lawsuit is merely to obtain monetary damages to business, rather than correction of the business’s ADA violation itself. The problem with this legislation is that it places more emphasis on the person or business that is being charged with violating the ADA than it does on the person or people the violation negatively affects.

This legislation gives businesses up to 60 days to even acknowledge an ADA violation is present and an additional 120 days to correct that problem. And beyond that, there is no guarantee a business must oblige with correcting the violation. Even within the current parameters of the ADA, there are instances in which businesses are permitted to cite that correcting any violation might present an “undue burden” on the business, which is a fancy way of saying it would cost too much money to correct.

Given the shortcomings that ADA has in its own right (which we’ve previously discussed here),   it seems fairly obvious that weakening its enforcement will do far more harm than good.

A report from the Consortium for Citizens with Disabilities (CCD) explains the possible problems that could arise when business owners are allowed even more time to correct ADA.   According to the CCD, “The bill’s supporters aim to protect business owners from the burden of understanding and complying with rules designed to ensure that people with disabilities have access public accommodations, on the ground that this burden is too heavy for businesses to bear.”

This is not how civil rights are supposed to work. Business owners are not the class to be protected in this case. In fact, they are often the source of institutionalized discrimination against people with disabilities, whether that comes in the form of insufficient access to places of public accommodation, or by being either unwilling or unable to provide reasonable accommodations in the workplace. It is not the business owners’ comforts that must be spared in this case.  Rather, it is their responsibility to ensure that people with disabilities are given appropriate accommodations to utilize their services or public spaces.  Despite this basic fact, business owners are given an ever-increasing benefit of the doubt.

The CCD report continues, saying “people with disabilities are expected to shoulder this burden and to provide businesses with information about the specific legal obligations that they are violating—after those individuals have been denied the access rights that Congress gave them decades ago.”

This clearly shows that the benefit of the doubt on the side of the business owners is not justified. As the CCD points out, people have had more than enough time to be aware of the law and the standards they must follow to be compliant with the law.  However, even if business owners were not aware of the law, it does not excuse their partial or total disregard for it.

The report further states that, “H.R. 620 was not written in consultation with representatives of the disability rights community and it would create barriers to the civil rights for persons with disabilities that do not exist in other civil rights laws.”

No one would dare think it reasonable, 27 years after the passage of the Civil Rights Act, for a business owner to restrict service to nonwhite customers, and then be given months of grace period before the accommodation must be followed. They would be immediately subject to violation, regardless of their comfort, regardless of their ignorance, and regardless of whatever sacrifices they might be making to their profit margins. It would not matter.

There are reasonable concerns about the existence of “drive by lawsuits,” if, and only if, a settlement between the business owner and the suing party is reached without the violation actually being corrected. In such circumstances, the concern seems not to be about civil service to the disability community, and more so about exacting revenge on business owners for nothing more than rhetorical purpose. As such, settlements in this realm should be discouraged, and monetary damages awarded only in cases in which violations are actually corrected. It would be difficult to find a disability advocate who, in having to choose between an access barrier being removed and a business owner having to pay for failing to remove the access barrier, would exclusively choose the latter. The most important aspect of disability inclusion is not mere awareness and it is certainly not extortion of those who fail to comply, whether intentionally or not.

It is providing the tangible benefits and accommodations that are needed for a fully inclusive society to come to fruition. Through educational campaigns, people still uneducated about the ADA must become educated. Through changes to building code regulations that make a point of emphasizing that accessibility must be considered, can violations become less likely to occur at new sites. Through increased public works projects, sites that are currently noncompliant can be efficiently corrected, no matter how old they are.

Regardless of how complicated it is to ensure that the rights of people with disabilities are fully enforced, one thing is certain: Giving business owners more time to ignore the law will do nothing to help advance those rights.