People with Disabilities Are Under Attack 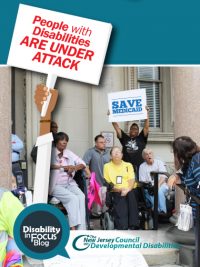 I believe that all citizens with disabilities and their families are natural advocates by default. We learn fast that we need to advocate for ourselves in schools, in finding services in our community, and in speaking out for our everyday wants and needs. When it comes to issues of broader importance, however, the disability community tends to drop the ball. We just think, “Oh that’s not going to affect me,” or “they don’t care about people like me”. Unfortunately, there is something very big and very troubling on the horizon, and people with disabilities face a choice: either stand up and let your voice be heard, or lie down and just let it happen.  This needs to be a wake-up call to all of us.

While most people by now have heard a lot of talk about the healthcare bills currently making their way through the US Congress, not enough attention is being paid to how Medicaid cuts (a huge feature in both the US House of Representatives’ and the Senate’s healthcare plans) will harm people with disabilities.

As you may have heard, the House of Representatives passed the American Health Care Act (AHCA), and the Senate is currently working on their own version of the bill.  Both versions call for huge cuts to Medicaid – by as much as $834 billion over 10 years.  To make matters worse, the President released his federal budget proposal last month, and in it, listed an additional cut to Medicaid of $610 billion.  Put together, this could mean Medicaid cuts of almost $1.4 trillion over ten years!  These cuts would severely impact those in the disability community, make no mistake about that.

The Medicare and Medicaid programs were created in the mid-1960s to help the poor, elderly, children, and disabled have access to healthcare and services. Let me explain the difference between the two programs. Medicare is designed specifically for adults over sixty-five, with the funding coming from the federal government to all the states. Medicaid provides services to not only the elderly, but also the poor, needy children, and individuals with disabilities.  Each state has to pay a matching portion of the services. This is why, for example, in New Jersey, you have to prove Medicaid eligibility to receive services through the Division of Developmental Disabilities. Just about 90% of all disability services are paid with Medicaid dollars. The president and Congress are proposing to up to a 47% cut to the funding that pays for the services that people with disabilities need. This would not be a minor inconvenience. This would catastrophe for the services people with disabilities receive. As an example, group home programs, which allow individuals to live in the community, may be affected. These programs are considered optional by the states.

If these cuts are enacted, they would happen in one of two ways.  First they could happen through Medicaid Block Grants, which gives the states the responsibility of dividing up whatever Medicaid funds remain. To help illustrate this, let’s assume that the federal government allocates a flat block grant of $50,000 to the state of New Jersey. Organizations like the AARP and the Arc, which have advocated on various issues alongside each other in the past, would suddenly have to fight against one another for an adequate share of the limited funding available.  It would essentially create an “every man for himself” scenario among services providers.  The second way that Medicaid cuts could take place is through “Per-Capita Caps”.  This means that the federal government will set a maximum amount that they will give the state for each individual who tries to get services through Medicaid.  So, if the federal government allocates $5,000 per person on Medicaid, and a service provider is considering which people they can take on as clients, they’ll be forced to only choose those whose service needs cost less than $5,000 per year.  If you have more significant support needs (that would cost more than the limited amount that the federal government will give to serve you), you may not have very many places to go to get services.

I have tried to be as general as I can with these scenarios because even the best experts will tell you they don’t know exactly how all these changes will roll out. It is because of this uncertainty that each and every advocate must use their voice to save the Medicaid funding on which our lives depend. It doesn’t matter whether or not you overall support the current leaders in the White House and Congress. Political affiliations are not important. Without the supports that people with disabilities receive through Medicaid, this is a matter of life or death!

As long as there are people, there will always be people with disabilities; and they will need services. Even if every single American wanted a fair wage for caregivers and DSP’s, a curb cut on every street, and an accessible entrance on every building, it won’t matter if we can’t fund it.

This is our chance.  We have to reach out to our elected leaders.  We have to remind them that we need Medicaid to fund the services that enable us to live our lives.  We need to remind our lawmakers that all citizens with disabilities and our families deserve the same opportunities to life, liberty, and the pursuit of happiness as every other American. We need to tell them to stop cuts to Medicaid!