How Many Good DSPs do We Have to Lose? 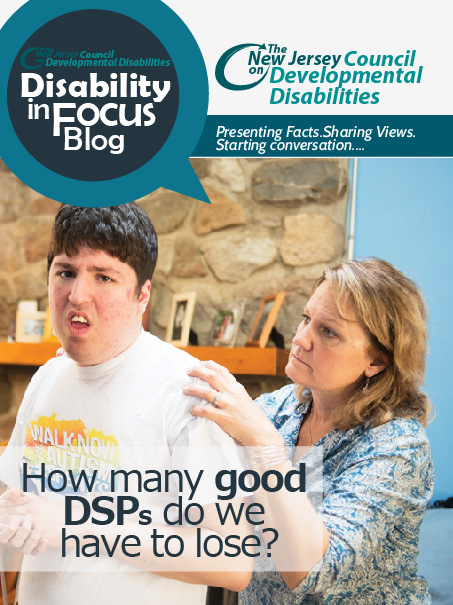 The other day, I was going through my phone and scrolling through my contacts, trying to find someone to text. I came across the picture and phone number of one of my old Direct Support Professionals (DSPs), and it instantly brought a smile to my face. I began to reminisce about all the great times we shared. Unfortunately, when you have a disability you get used to sharing your life with many different people. He was not the first or the last staff I would have to say goodbye to. It’s just a part of life for a person with a disability. This particular person will always hold a very nice spot in my heart. Out of respect for him I am choosing not to reveal his name. He would not like me bragging about him.

Approximately five years ago in New Jersey we had a really bad winter, where it snowed literally every week. As anyone who uses a wheelchair will tell you, inclement weather can be a real nuisance – Wheelchairs and snow don’t mix well.  But, just like every person in the world, I still had to live my life. At the time, I was given ten hours a week with a Direct Support Professional for recreational activities. Normally, My DSP and I would get the car and go anywhere we pleased, but due to all the snow, options were limited. One particularly snowy day, we decided to go to the gym, go catch a movie, and get a bite to eat. We laughed all day telling each other jokes. As we left the movie, he slipped and fell on a patch of ice.  He insisted that he was okay and he didn’t need medical attention. We just continued throughout the day, laughing about the fall. The next day, however, his pain from the fall increased and he ended up going to the emergency room, where it was discovered that he had bruised and broken ribs. He was told to rest for six weeks before returning to work. Like most DSP’s he did not have any benefits package, so he returned to work with me just two weeks later.

Just a few weeks after that I found myself with his son and daughter saying our final goodbyes. Along the way, he had a second fall, which caused a brain injury that went untreated. To be clear, the first fall at the movie theater is not the underlying cause of his premature death. I just always wonder if he had a few paid sick days and did not feel the need to work, would he still be with us today. The image of his children at the funeral is something I can’t forget.  A good man passed away because he went to work instead of resting.

Here is what we already know about the Direct Support staffing crisis: There are little to no health benefits for many of these workers; The average pay is about $10 to $11 dollars an hour; The provider agencies cannot and won’t give their employees a better wage because their rates have not gone up in about ten years; The turnover rate is astronomical. Yet, as long as there are people, there will always be people with disabilities that need support.

What you need to be a good DSP cannot be expressed on on some spreadsheet or a financial report. You need to have heart. You need to feel empathy. You have to go the extra mile. If you do this job correctly you will laugh. You will cry. You will get angry. Before coming back the next day and doing it all over again. Yes, anybody can do this job but only few will excel at it

Advocates and family members are beginning to feel like the little orphan Oliver going up to the table with their elected officials to ask “Please sir, may we have some more.”  Why are we still hoping for some spare change in the federal or state budgets every year to cover DSP wages? I know several advocacy agencies are working tirelessly on behalf of their DSPs, but we need comprehensive action by legislators to ensure that employees make a fair wage with a decent benefits package that they earned.  It shouldn’t matter if it is a self-directed employee (SDE) or an agency provider. Families using SDEs are going through their own struggles with the transition from Easter Seals to PPL. They’re having trouble just getting their employees paid at all!  In my career as a disability advocate, hearing the feedback and horror stories of this transition that was so mishandled, it is enough to make you sick. No parent should have to struggle to pay someone just so there son or daughter can have a shower.

I recently celebrated my thirtieth birthday.  Unlike most birthday parties, mine was not filled with tons of family or college friends, but rather my DSP’s that have become my friends. Everyone at the party has seen me at my most vulnerable. I am not a naïve person; I don’t expect them to work with me forever.  But if they had a fair wage and the ability to take a day off without their job being threatened, then maybe they could stay, and not leave just as the relationship is beginning to grow and become more comfortable. I know I am blessed because in the age of social media I can still keep in touch with a few of them. I love getting texts from them just to check how I am doing. Still, there are some I will never see again. How many times do I have to say goodbye?  Most don’t make it a full year before they have to move on, doing the same thing for literally a dollar more.

What about nonverbal clients who need their staff to be their voice. They have to find someone that can understand how they communicate. The DSP that can figure out, through a look or body language, ideas like “my shoes are on the wrong feet,” or “I like mayonnaise on my sandwich,” is truly priceless to that client. When that DSP leaves for another job, some clients with intellectual and developmental disabilities have trouble comprehending what just happened. Their trusted DSP might as well be dead! They don’t know if they did something wrong. That is truly heartbreaking. You won’t find that on a report.

The reality for most DSPs is that while many of them don’t want to leave, they just can’t stay. I know what I’m asking for is very difficult but I am imploring our elected officials to not see this as a political issue or a budget problem. This is about giving stability to people who need the support of others. I challenge New Jersey legislators to put forth comprehensive legislation for DSPs to have a fair wage and a decent benefits package. So many times New Jersey is in the middle of the pack when it comes to disability issues. What if for once New Jersey was at the top of just one of those categories? Let’s stop saying goodbye.  Let’s stop wondering what happened to our DSPs.  How many good people do we have to lose?