How and Why Disability Bias Remains Pervasive 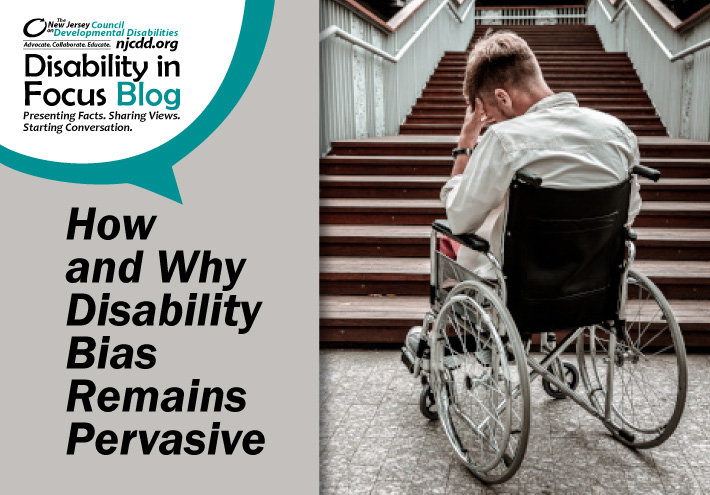 The ways in which people with disabilities are discriminated against in society range from subtle to egregious. All different structures exist in the world that are built unconsciously for neurotypical and able-bodied people. As with any other bias toward a demographic, just because someone does not outwardly have an aversion to people with disabilities does not mean they are fully welcome.

Ableism is not a small wrinkle inconveniencing some people’s lives, but an entrenched social norm that infects so many aspects of social cohesion. The reality is that people with disabilities are people, deserving of all the access as any of their able-bodied and neurotypical peers. We don’t receive it, because the world is not built for us, and people don’t have us at the front of their minds when designing both social and physical structures. A Forbes article by contributor Andrew Pulrang expands,
“Every unnecessary barrier in businesses, offices, and public facilities restricts disabled people’s mobility, and puts another part of the community out of their reach. Likewise, failing to provide information and communication in alternative formats — including websites and social media — further isolates and impoverishes the everyday lives of people with visual, hearing, and communication disabilities.”

This is crucial. This demonstrates that ableism, discrimination against people with disabilities, is not the result of individual actions or bad attitudes from non-disabled people, but is the result of tangible structures that make our lives harder. Annoyingly enough, we are often overlooked in discussions of discrimination. People may simply forget we exist. The Forbes article continues, “Disabled people today are in many ways far more free and mobile than ever before. But they almost all still encounter physical and design barriers that shouldn’t be there. These barriers are more than just a personal affront. They compound disabilities themselves, and make disabled people’s struggle for independence and freedom harder — in some cases out of reach.”

Another reason this might be the case is because the Americans with Disabilities Act, where it’s known, is thought to be a broadly sweeping law whose purpose was to rid the country of all forms of ableism. It doesn’t do that, but governments and the “business community” may feel that they have done just enough to avoid a bad reputation. Pulrang says,
“It’s so obvious that it should hardly be worth mentioning, but a good first step businesses and organizations can take to fight ableism is to make sure their facilities and services are accessible. It’s been over 31 years since the Americans with Disabilities Act made accessibility a nationwide legal standard, and failure to ensure it is a violation of disabled people’s civil rights. In 2022, there is virtually no reasonable excuse for any business or public facility to be inaccessible to people with disabilities.”

This is all well and good, but of course even compliance to a law meant to curb ableism will not eradicate it. It involves consistent consultation with the disability community, regular updates to standards as new ideas and new technologies emerge to help us, and of course, a massive reallocation of resources that might cause the so-called “business community” to accuse the disability community of encroaching on their sacred private property rights. Good. Let them whine. It’s going to take a lot more than a positive attitude and giving us a proverbial “seat at the table” to reach equality of social power, and that is what we need.

Nikki Rojas of the Harvard Gazette explains further, detailing the results of a study on disability bias.

Tessa Charlesworth, a postdoc in the Department of Psychology, has dedicated her research in recent years to answering the question of what sparks change in attitude with respect to negative social prejudices. The facts are that “some of her newest analysis has turned up a troubling trend involving implicit biases toward disabilities,” Rojas writes.
Charlesworth, Ph.D. ’21, who works in the lab of Mahzarin Banaji, has found that those hidden prejudices have hardly changed over a 14-year period and could take more than 200 years to reach neutrality, or zero bias.

As it stands, we have neither the time nor the patience to wait that long. We’re alive now, and we want a good life for ourselves as well as future generations. We deserve a sense of collective self-direction.

“Implicit bias can change. But so far, it’s only changed for some groups,” Charlesworth said. “It changed for sexuality and race bias pretty dramatically. Sexuality biases dropped 64 percent over 14 years, but it hasn’t changed at all for disability, age, or body weight bias. Disability bias over 14 years has only shifted by 3 percent. The disparity between the change in sexuality bias and the stability in disability bias is massive.”

Perhaps one of the reasons disability bias is so pernicious is because, unlike other states of being, one of the things that characterizes impairment, is the reality that there are things we literally cannot do in the same way as everybody else, and not merely the things we are not permitted to do by external force of law, economics or social pressure. Because disability so often correlates with impairment, this may lead people to think that disability is an immutable and fundamental law of nature. As such, many people may feel it’s appropriate to have a baseline norm, from which if a person deviates, they will be judged to have “inferior” ability. This common understanding may lead people to believe that people with disabilities are naturally inferior to others. This is dangerous nonsense. First of all, because not everybody has to do what they do in the same way as others. Second of all, because not everybody has to do the same things. Abilities do not need to be the same.

We are people and we deserve access to the best possible ways to live our lives and express ourselves, and thrive to the best of our ability. That is clear. However, we also deserve grace for the things we struggle with doing and the things we literally cannot do and may never be able to. Only when the public fully embraces and accepts our differences, and the social infrastructure of our lives allows us to thrive anyway, will disability bias cease to be a systemic issue.