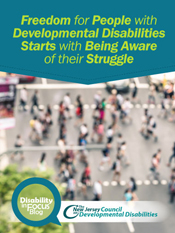 Disability in general is a widely prevalent, yet seldom acknowledged phenomenon. The public knows it exists in abstract, but find it extremely hard to confront in reality. It’s even harder to confront struggles which are invisible or not connected to an immediately apparent body part. Developmental disability is broad and unique term, as people with developmental disabilities do not all have the same impairments as each other.  It is hard to know how to improve society for people with such a wide range of impairments if the first instinct for the rest of the population is to ignore or relegate them. In order for their rights to be fought for, people have to know they exist.

In addition to understanding the necessity to accommodate people with developmental disabilities, it is also necessary to know what to avoid when interacting with people with developmental disabilities. This is where online videos detailing subjects like “Things Not to Say to Someone with Autism.” In the aforementioned video highlighted on the National Association of Councils on Developmental Disabilities (NACDDs’) website, it explores some of the most damaging stereotypes of people on the autistic spectrum, summed up most poignantly by one of the phrases that should be avoided: “You don’t look autistic.” It’s important to dissect this well-meaning, yet extremely hurtful saying for what it is: An attempt to erase the identities of people on the spectrum and default to the assumption that people on the autism spectrum must not be valuable members of society with a unique perspective to contribute. Someone who makes this statement sees people with autism as a uniform mass with nothing more to inform the neurotypical population. They’ve seen enough movies. They’ve watched enough documentaries. They’ve read enough “inspirational” news stories. They have read enough testimonials from parents who are against vaccinations for children. They think they are as aware as they need to be. Obviously, they are not.

In another video segment, “Things Not to Say to Someone with Cerebral Palsy,” participants explored the feeling of being assumed drunk when the reason why they are moving as they are is due to their Cerebral Palsy.  This is another dehumanizing example that demonstrates that many people’s initial reaction to someone with cerebral palsy is that they are confusing, erratic, and not worth consideration. They also describe their reactions to being asked; without regard to its inappropriate nature, whether they are able to have sexual intercourse. They talk about, once again, being treated as an “Inspirational” for simply being out in public. There’s more to a person with developmental disabilities than to make able-bodied, neurotypical people feel good about themselves. There is more to be aware of about developmental disabilities.

When Ronald Reagan declared March to be Developmental Disabilities Awareness Month in 1987, it was just 14 years removed from the first ever legislative protections for people with disabilities of any sort, and clearly, the public still had a lot to learn.   It is generally accepted now that, in abstract, people with developmental disabilities are valuable members of society. The concrete reality is that we can unequivocally be valuable to society. Whether we’re actually valued by society, however, is an entirely different question. We are definitely valuable.

The road to disability inclusion, especially the inclusion of those with developmental disabilities, continues to be a long and complicated journey that may never be truly “over.” However, progress in the areas of social justice for people with developmental disabilities are constant. This includes not only an effort that needs to be made to extend opportunities in educational and vocational areas of life but also in everyday social interaction.

One of the most damaging aspects of the public’s perception of people with developmental disabilities is the assumption that they cannot “fit” in the workplace among able-bodied coworkers. This works out to be a self-fulfilling prophecy. Like most people with difficulty finding a job, they may not have necessary experience.  In order to get experience, of course, they need a job, and so the pattern continues.

In reality, what people with developmental disabilities need is compassion, acceptance of their strengths and weaknesses, and a chance to contribute in a society in which they are not demeaned –  from school, to one’s social circle, to work, to family. Any opportunity that an able-bodied person has can and should be strived to be available for people with developmental disabilities. It’s a long road to tolerance, a long road to acceptance, an even longer road to inclusion and liberation. The fact remains, however, that none of that can be achieved without awareness.

For areas of life such as education, it is important for teachers and policy makers to be aware of the learning differences between neurotypical students and students with various forms of developmental disabilities. It is also important for students to recognize the differences in their peers. The more that adults and kids alike learn that people with developmental disabilities, first and foremost, exist, and secondly, are able to participate and function in society, the more accepting the general population may become.