Disabilities and The Labor Force: Where Do We Fit In? 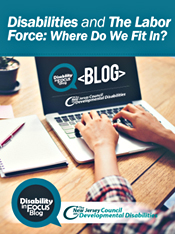 There are many milestones in adult life that are considered hallmarks of being a “grown up”, and one of those stages of life is financial independence. The idea of being self-sufficient is a romanticized notion in society, one which a places “making something of yourself” as an ultimate end goal. For disabled people, this can be very disheartening. After all, how is one to have any hope of breaking free of social and financial dependence after having come of age in a society that causes them to be dependent on the whims of others? The idea of this cultural staple is that it is wonderful for someone with impairments, who experiences disability as a result of barriers throughout their lives, to “overcome the odds” and be self-sufficient – so long as such independence is gained on terms set by able-bodied members of society.

The difficulty of achieving a comfortable work-life balance is present for most people. However, for the most part, it is a different kind of struggle for people with disabilities. Working “entry level” jobs is seen often as a stepping-stone for full independence, especially since most college graduates begin their life in the so-called “working world” with jobs that do not require a college degree. https://www.bloomberg.com/news/articles/2016-04-07/more-college-grads-finding-work-but-not-in-the-best-jobs

The unemployment rate for people with disabilities, according to 2015 data by the Bureau of Labor Statistics, is almost three times higher than the unemployment rate of the general population. Discrimination may certainly play a role in that; bosses may not know how to accommodate a disabled employee, or some workplaces may happen not to be accessible. However, it’s important to consider another crucial factor in why people with disabilities may have trouble finding work: On the one hand, there are a lot of “entry-level” jobs that people will disabilities, depending on their specific impairments, literally cannot do. Conversely, jobs that people with disabilities are physically able to do, and even theoretically well-suited to do, are jobs that may not be what their resumes permit them to do. The common saying that “you can’t get a job without experience, and you can’t get experience without a job” stings infinitely more for a disabled person.  Someone could be overqualified for a job whose skills they have competently demonstrated (albeit, perhaps more slowly than the average person), and underqualified for a job that they could never perform under any circumstances. https://www.bls.gov/news.release/disabl.nr0.htm

Employers and society in general have difficulty making sure that those with intellectual or emotional impairments are able to experience so-called “upward mobility”, with employment prospects that are either non-existent or described as “low skilled” (a discriminatory term in its own right). It is probable that many who have limited skills in the existing labor force may be either stuck unemployed or find it completely impossible move up the socio-economic ladder.

People with disabilities of all kinds are hindered both by the physical environment that surrounds them and the limiting social view of “success”. With a welfare system now in the hands of an administration that may be significantly under-informed about the challenges and needs of our disabled population, it is not acceptable to assume that “we will be fine.”  As with any shift in politics, the welfare system could change dramatically based on the views of those who are governing.  Meanwhile, as people with disabilities interact with environments that already make our lives more difficult than average, we are told by job coaches, educators, perspective employers, and others to play to our strengths to the extent that we can.  However, when we do, we are often told that our strengths have limited use to the rest of the world.  We make up such a large percentage of the labor pool that is not working, primarily because employers don’t seem to need us.

It is my perception that, with the way the economic system is structured, their thinking well may be, “Why employ a defective cog in my machine when I can use one that isn’t broken?” This kind of thinking may be subconscious, it may be unintentional, but it is certainly present.

The regrettable truth is that a worker with disabilities who thinks that is sometimes absolutely correct. In a system that values efficiency over human potential, people with disabilities are broken cogs. The machine was not built for us to take up any space, and until recently, many of us were not even seen as worthy of education. This is the machine we have to contend with. Maybe it’s time for some new hardware.