Children with Disabilities Must Retain Equal Access to Education 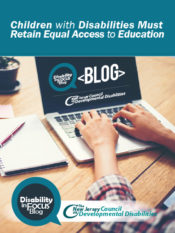 It’s well established that the rights of people with disabilities can be heavily tied to public policy and government activity.  People with disabilities, who continue to be at risk of discrimination and exclusion, must not be forgotten.  One of the most fundamental ways in which people can adequately participate in society is through education.  It is sometimes forgotten, however, that not everyone learns in the same way or using the same methods.  Of course, education, whether formal or informal, is valuable in all forms.

Luckily, society and the government have largely recognized the right of people with disabilities to learn.  However, it is a delicate right that must be protected at all costs, as the ideological views of any given administration may lessen or outright destroy it if the public is not vigilant.  Prior to the passage of the Individuals with Disabilities in Education Act (IDEA), it was common for children with any variety of disabilities to be deemed “unteachable”.  Thankfully, this is no longer the case, at least not in any official capacity.

That is why it was especially disappointing when, during the recent confirmation hearing of US Dept. of Education Secretary, Betsy DeVos, it was clear that she either believed that the enforcement of the IDEA should be enforced on a state-by-state level, or even worse, that she was not aware that the law even exists.  This kind of passive ignorance is not a good indication that the educational rights of children with disabilities will be protected in the coming years.

This raises an important point about the status of disabled people in the education system.  It may not be allowed for a school district to officially exclude someone from enrollment on the basis of disability, but regulations can remain unenforced if those overseeing the system don’t care to enforce them.  If the appointment of a US Secretary of Education who has never taught in or even attended a public school is any indication, it is not a stretch to worry whether the IDEA will be as protected as it once was.

One of the most important aspects of the IDEA is the mandate of the right to free and public education for children with disabilities.  In essence, a public school district is not allowed to refuse a student with a disability.  Every effort must be made to ensure that every child has an equal opportunity to learn.  School districts must also ensure that students with disabilities be integrated with their typically developing peers, in a provision known as “least restrictive access”.  Children with disabilities, the IDEA mandates, must not be prevented from learning alongside typically developing children, and must still retain the rights to their individualized education.

Individualized Education Programs (IEPs) specify that if a child has a disability and needs special education services because of their disability, a plan must be laid out which accounts for accommodations that the child needs in order to be adequately educated.  This is written by the child’s parents, teachers, and a variety of experts in the field of education.  All to ensure that a disabled child’s education is adjusted to their needs.

Despite all of this, there is one crucial circumstance on which the rights of children with disabilities hinge: Public schools must be thoroughly funded and well-monitored.  Secretary DeVos, however, is a prominent advocate of defunding public schooling in favor of an increase of private schooling instead.  She, and many people who agree with this viewpoint, refer to this as “school choice”.  The fact that there are some instances of sub-par public schooling in America is answered by Ms. DeVos and others with proposals to increase private and charter schools across the country.  Granted, there are aspects of the public education system in America that are problematic.  But the solution is not to weaken them.

The families of children with disabilities tend to have less disposable income than the average American family, so not only would cuts to public education hurt them the most, but could very well make many students with disabilities once again “unteachable”.

Theoretical access to a basic right is useless if someone cannot afford it, or if no one makes sure it is carried out correctly.  There are problems in the funding of public schooling in America.  But the problems in education won’t go away by making public schooling less available.  In order for education to be a truly universal right, every effort must be made to make sure funding is equally distributed.  To strive for a fair and equal society, public education must be maintained.

Making it more difficult for children with disabilities to learn among their peers will only further marginalize them.  Strong and comprehensive public education suited to their needs can liberate them.  And that which can liberate the most vulnerable in society can liberate society as a whole.

Editor’s Note:  As with all contributions to the Disability in Focus blog, expressed opinions are not necessarily those of the Council’s membership. The NJCDD welcomes active conversations around issues important to people with developmental disabilities in New Jersey. We hope you’ll join the conversation in the “Comments” section below.